Posted on January 20, 2013 | Comments Off on LABOURING PETER JOHN

Regular readers of Southwark Notes will know that when we want to labour a point, we will do! In our previous post we pointed out that when Leader of The Council Peter John blames the silent poster protest at the Heygate Masterplan Planning Permission Meeting on those ‘not from The Elephant & Castle’, we wondered both how he might have known this and would it even matter if they were. We also said that pretending it was outsiders who came along to disrupt the event was ‘one of the oldest and slimiest political tricks in the book‘ 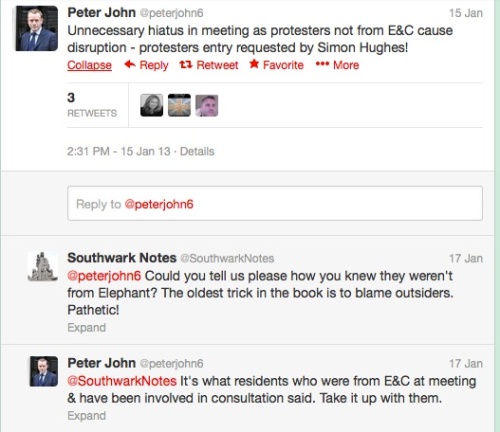 When we asked him via Twitter how he knew it was people from outside The Elephant his reply made us sense that maybe he then wondered if it had been such a good idea to hastily and publicly blame it on outsiders. So switching to the perhaps the second ‘oldest and slimiest political tricks in the book‘, the tactic of divide and rule, he replied that that was what he was told by ‘residents who were from E&C at the meeting & have been involved in consultation. Take it up with them‘. We would point out this:

1) Peter believes so much in the consultation process as the most amazing winner of hearts and minds locally but forgets that despite members of Elephant Amenity Network, Wansey St and Garland Court TRA and Heygate Leaseholders Group all being some part of the consultation, they were the ones at the meeting objecting to the Masterplan and being quizzed on those objections by councillors for nearly two hours. Elephant Amenity Network had even sent a public letter to both Soundings Consultation agency and to Sarah Gaventa as Chair of the Lend Lease-created Regeneration Forum criticising the consultation process. The letter was signed by 28 local people or those working locally. So it’s not as if those who chose to take part in the consultations wouldn’t have something to protest about nor support the protest which is what many of those there on the night did. The objections and the signs in the protest were saying the same things.

In addition when we recently published our lengthy analysis of Soundings and the consultation: Listening To No End, we had had lots of emails of support and thanks from local people who were part of the consultation and agreed with our dire judgement of it all. We suspect it would be a hard task indeed to find many people who thought that the hours and hours we all spent in consultation had actually achieved anything substantial in the Outline Masterplan. Simply put it hasn’t and that is why objections to the plan took two hours!

2) Telling us to ‘Take it up with them‘ is a classic switching of gears and maneuvering himself away from any responsibility for what he had said. Now it can be spun as a case of it was the good objectors who had been consulted who told him it was bad outsiders so it wasn’t his fault if they had been wrong! Well, the most obvious point to make again is – in a public meeting open to all, how would anyone know where everyone had come from? But this is somewhat by the by really! We were in the room and we certainly recognised quite a few of them and the local Elephant campaigns they are part of because there has been such a slow but building resentment of this regeneration scheme as more and more promises are broken that you do get to know a few people along the way!

We leave this labouring the point with an amazing email we received after the Planning Meeting and our report on it. It puts the case much more eloquently and brilliantly than we might be able to:

“Dear Southwark Notes,
I think that the objectors and protesters at the Planning Committee last Tuesday were an amazing evidence of what could only be called a process of collective self-education about planning and urban regeneration policies in the Elephant. The depth and ingenuity of the objectors’ arguments was only schematically reflected in the protestors’ references to planning regulations and policies. But it was all there because years ago many local residents embarked on a process of learning and disseminating information about the changes proposed and taking place, putting up or attending visioning events, holding regular open monthly meetings to discuss changes in the proposed plans, seeking the advice and knowledge of urban experts, writing concerned and informed letters and emails to local Councillors, to MPs, to planning experts, architects, newspapers; making and watching documentaries about the area; organising and visiting photographic exhibitions of local communities, interviewing and being interviewed…

The objections and the protesters are only a small testimony of this large, engaged and enraged community of concerned citizens and residents that know the area as the back of their hands, having spent years poring over badly written and incongruous plans and contradictory policies, and evenings and days formulating the right questions to ask at ‘consultation’ meetings and open events… this is a participatory, varied and democratic public – one that understands constrains and not only critiques but also proposes (see EAN Visioning Event repart and EAN Interim uses report), that has always tried to engage and never to simply reject urban change…

The accusation that they are not ‘local residents’ is baffling: only an act of love for the neighbourhood and the area would have made all those people remain in a stiflingly hot and stuffy room for over 6 hours listening to planning jargon, poring over 200 pages documents, attentive, furiously taking notes, knowing what was being said, why the developers’ speech was full of euphemisms and fuzzy sales pitches, because none of what they say is grounded in the reality of the area, because what they are proposing is just another anonymous and alienating cut and paste from their repertoire of ‘global solutions'”

—
Normal Southwark Notes service will now be resumed after this unnecessary hiatus concerning The Leader of The Council.