Student housing ‘has emerged as the best-performing asset in the US and UK
property markets. In the UK, student housing funds have returned close to 12 per cent since the start of the year, compared with 1.2 per cent for all property. The student housing sector has ballooned from a fringe investment 10 years ago to a global market worth $200bn today..A lot of large investment funds have bought into the sector during the past year, keen to gain a foothold in a market that is largely decoupled from the economic turmoil affecting the global financial markets…Unite, the UK’s largest student housing provider by bed numbers (40,000), outperformed all other non-listed UK property funds during 2012. ‘. Financial Times,  ‘Student housing is top property asset’. November 4, 2012

The new Fresh Student Living site is nearly ready on the site of the old Petrol Station of many years ago now. Originally The Council refused this development planning permission (Sept 2009) but a planning inquiry overturned this in July 201o. The Appeal Decision makes interesting reading although it’s 20 pages. Full of useful stuff though. Click here to download PDF of Walworth Rd Student Housing Report.

Despite numerous things that fell flat of existing council policies the student housing was built anyhow. Student housing in the Elephant & Castle takes away sites for new housing of which 4200 new ones are proposed for the area. The Council had already declared that:

“1.      The proposed development of student accommodation is an inappropriate use of the site and fails to provide a balanced and integrated mix of residential accommodation across the full range of private, social, key worker and other affordable housing and a range of unit size in particular family housing within the Elephant and Castle Opportunity Area as required by the Policy 6.1 of the adopted Southwark Plan. (link here)”

and also from the same report:

“2.      The proposal is unacceptable as the need for the proposed student accommodation has not been demonstrated contrary to the Policy 4.7 of the Southwark Plan.”

Southwark’s Planning Committee on 8th Sept 2009 had already said about this development that:
“52.     Under current policy the evidence appears to demonstrate the need within Southwark to satisfy policy.4.7, though the Residential Design SPD does request that a letter be supplied by a local education establishment and this has not been provided“.

‘55.     The applicant has advised that borough based Universities such as University of the Arts and Kings College London have confirmed that they have an active requirement for Student Accommodation in Southwark, but they have been unable to confirm take-up for this scheme from a specific local education establishment in the form of a letter.”

So, anyhow, this is how things get built in Southwark!

Dashwood Studios, as the student digs, is called is now fully booked. £220 a week for a single room. You could say that this is another housing site now made unavailable for building the promised affordable housing for those Heygate Tenants who signed up for Right To Return. The above Report gives figures of 250 folks who had made this request as of February 2010.

The next phase of studentification(*) is mooted for Hampton St, the curent site of the taxi washing and mending place amongst other old Walworth light industrial building of yore. You can see the alliance between University of London Arts (includes the London College of Communications at The Elephant) here. Lots of plans and specs and all that. Also promised on top of the flats are ‘incubator units‘ for ‘new companies‘. 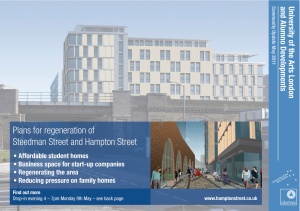 The brochure reads ‘by building accommodation close to the University, we can reduce pressure on homes for local people and families‘. How does this work exactly? Even the Universities UK report on Studentification remarks that common problems of the increase of students in an area are the ‘inflation of property prices and a change in the balance of the housing stock resulting in neighbourhoods becoming dominated by private rented accomodation and houses in multiple occupation and decreasing levels of owner-occupation‘.

Added in to this is an increase in the population of residents who are only in the area for a few years before passing on. The report praises many positive effects of studentification however we see many of these as problematic: more pubs and clubs for a late night economy, change of local shops into cafes, venues etc, demand for student housing is stimulus to private rented sector leading to house prices rising, growth in buy-to-let properties etc. And these are the positives! The negatives are called ‘challenges‘ in the report – increase in questionable behaviour in the streets, crimes rate rising (burglary, robbery, vandalism) and insurance premiums rising, decreased demand for local servives leading to closure, student bars and pubs have detrimental affect on residential amenities, decrease in family housing due to conversion of houses to student flats, temporary nature of students in an area leads to disincentives in respecting the older population and the communal obligations expected by different social groups….

“Highline Building is a brand new development exclusive for UAL students, a short walk from London’s Southbank, perfect for students looking for an independent living experience…

THE UNIVERSITY AS DEVELOPER / SPECULATOR. 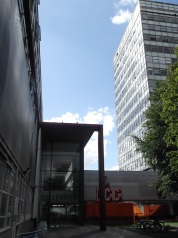 London College of Communications and South Bank University also function as major players in local development plans. The LCC, sitting as it does on a prime Zone One location, has been slowly expanding over the last decade. It also has somewhat vague plans to sell off their tower for residential use and bang a new college into a somewhat reduced footprint.

South Bank University owns a vast number of buildings in the Borough Rd and Borough High St area. They have also been slowly recognising a long term plan to develop the empty Georgian terraces on London Rd and the old Chapel on Borough Rd. In the last three years, they built two vast buildings on top of an local pub and the empty Dole Office on Keyworth St. 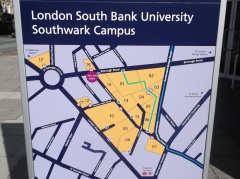