Walking down the street, three large empty buildings stick out. Two of them are the rather ornate legacy of Georgian Walworth. There’s formerly-owned by the Council and listed John Smith House at 144-152 Walworth Rd (for sale for £5m), and opposite the Cuming Museum, the old Confederation Of Shipbuilding & Engineering Unions at 140-142 (for sale for approx £695,000). The final one is the ex-Council-rented Chatelaine House at 186 and in the slow early planning stages of redevelopment.

All display the sign “Protected by Occupation”: John Smith and Chatelaine Hse are taken care of by Ad Hoc,  and the other by Ambika. Both companies employ ‘guardians‘ as temporary live-in security for vacant properties, a strategy pioneered in the United Kingdom by the Dutch company Camelot

Legally, these companies operate as commercial middle-men between the property owner and the guardian, who signs a temporary licence agreement and becomes a licensee. This means that although living in the property, s/he has no right to tenancy, as the licence is a commercial agreement. The result is that under normal circumstances the company can terminate the agreement with only a two-week notice, and there is no possible legal appeal to it, unless the guardian is prepared to risk being charged with trespassing.

On top of offering their services as 24/7 caretakers, the guardians are expected to pay council taxes, keep the place tidy and pay a weekly rent (apparently not with Ambika) which is below market value for the property, yet above any reasonable expectation for a temporary, non-residential accommodation.

Live-in guardians are recruited through a vetting system and need to comply with a series of stringent regulations. From the Ad Hoc’s website, applicants must prove to have a regular source of income, and must be “flexible, ready to move at short notice, without dependents and without pets”. The images of the ideal caretaker leave no room for doubt: flexible young professionals whose job does not impinge upon the choice of home, as for freelancers or other types of precarious workers. 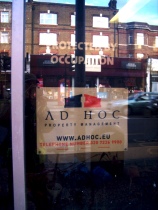 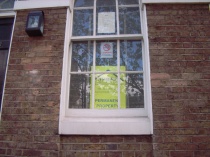 With the welded-up Heygate Estate at a stone’s throw away, and the Southwark council’s housing waiting list estimated at 1,200 households (February 2010, National Housing Federation) these companies speculate on the housing crisis without offering any respite to the hundreds of individuals on the waiting list that do not correspond to the desirable pedigree of the live-in guardians.

You could think that the super flexible and precarious freelancer without a partner or dependents is the perfect resident of the increasingly privatised and regulated modern London, a city in constant re/development – Ready to leave at short notice and to abdicate his/her rights to tenancy, these are the desired urban inhabitants of city that demands ever more extreme forms of adaptability, whilst withdrawing all legal safety nets.

See also: North Walworth SDP which includes some of the buildings mentioned above. Also worth reading is Matthew Hyland’s entertaining article that has some analysis of Cameloot: Embedded Adventurism:

‘If Camelot, a squatting-substitution agency, is targeting key workers, it goes to show that the emergency that makes squatting necessary, i.e. the reasonable expectation that finding even barely adequate housing by conventional means may simply be impossible, has spread so far as to engulf securely waged professionals enjoying special state protection. (In London officially ‘affordable’ housing is set aside for those with paltry incomes of under £50,000 per year [Mayor of London’s free newspaper]. Average annual income of council tenants in the officially fashionable borough of Islington is under £5,000′.

UPDATE: September 2010
Seems like the Ad-Hoc property guardians at Chatelaine House have been given the ‘short notice’ boot. The place is now rented to Bishop Climate Irungu’s Kingdom Church, a church that claims ‘God has confirmed Bishop Climate’s with a worldwide Ministry Through powerful Signs and wonders. This include the restoration of Hearing and sight, disappearance of cancerous growth, recovery of Mental wholeness, instant healing of people diagnosed with diseases such as Aids, TB, thousands of people have been set free from bondage of marriage Failure, financial Failure, demonic attacks, which include witchcraft demonic attack..‘ So no longer will the owners Durkan, a property development group, be paying money to have people live in an empty building but will be accepting money from god-botherers who make highly dubious claims for themselves, to put it mildly!

John Smith House, not long ago bought by Safeland Plc, has just been given planning permission for conversion into a 75 bedroom budget hotel and restaurant for ‘likely customer group of younger people visiting the capital’.

Update: April 2012:
In the last couple of years several articles on the Financial Times (our favourite breakfast-table read here at Southwark Notes Inc.) have stated that local boroughs are the largest employers of these property ‘protection’ schemes, while Camelot Ltd is growing to become the leader in live-in schemes across Western Europe. So how much money do these controversial to say the least ‘live-in guardian’ arrangements cost the council?

We have recently read* that at least 20 buildings owned by Southwark Council have been occupied by Camelot Property Management Ltd live-in guardians since 2005, for a whopping bill of over £120,000 (2005-2011)! And since Guardians too have to pay to live in those often sub-standard accommodations, that’s a hefty profit for a company whose operations and temporary live agreements are rather shady, as recently analysed by Corporate Watch (see http://www.corporatewatch.org.uk/?lid=4190).

In September 2011 John Mills, Camelot’s supremo stated that “Camelot are a security company, but local authorities are coming to see us as a housing provider” – That’s just what Southwark residents need: Cash-strapped Councils throwing tens of thousands of pounds to de-facto subsidise temporary living for individuals who are not considered tenants and cannot receive any benefits nor legal advice – and all in the name of keeping the buildings warm while privatisation and stock transfer of public land and premises is under way…. well done!

* 1.      Please provide the number of properties that are known to be
currently managed by Camelot Property Management Ltd in the borough.
As at 06 January 2012 there were 7 properties occupied by Camelot. There
are currently 5 as at 02 February 2012.

2.      Please provide the number of properties that have been managed by
Camelot Property Management Ltd since 2005 in the borough
There have been 20 properties in total since 2005.

3.       Could you please let me know which Southwark Council department
is responsible for signing agreements with Camelot Property Management
Ltd?
The property division within the deputy chief executive’s department.

4.      Please provide the total amounts paid by Southwark Council to
Camelot  Property Management Ltd for the management of  empty properties since 2005.
£121,702.77 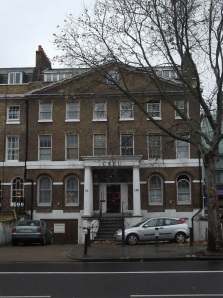 Update: Winter 2012:
The old Confederation Of Shipbuilding & Engineering Unions at 140-142 Walworth has been squatted again for months at a time this time round. Seems like the Property Guardians had already been evicted!