As time passes, more and more comes to be written about Austin Osman Spare, a painter and occultist that Southwark can claim as its own. Some of us here have done a fair amount of legwork and scribbling about Spare. Not only is Chapter 8 from the pamphlet ‘NINE THINGS THAT AREN’T THERE: a manoeuvre around The Elephant & Castle’ all about Spare’s living, working and walking in Southwark but we also organised a pub crawl once around the three local pubs that Spare has exhibited in in his shortish lifetime. Not only was he an exceptional illustrator, controversial war artist and painter of occult laced pictures, Spare also painted hundreds of portraits of local people in the later part of his life as a local Walworth character.

Spare had previously exhibited in 1904 (or 05) in the Newington Library, still existing by the old Town Hall (One Stop Shop) and much later at his studio above Woolworths at 56a Walworth Rd in 1937 and 1938 before it was bombed in 1941. The destruction of his studio meant he made a short stay at a hostel then at 86 Walworth Rd. Spare eventually moved to Stockwell, still painting and living with his cats before passing away in 1956. 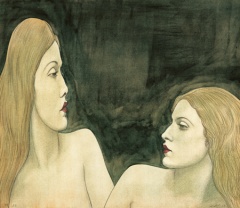 For more about Austin Osman Spare see the Internet or check out Phil Baker’s new biography. We haven’t read it yet but it looks good.

So, we mention all this merely to point up the passing away of The Temple Bar on Walworth as one more nail in Spare’s dusty spinning coffin. The Mansion House in Kennington has been closed far ages. It only leave The White Bear now. Tragic really! Does no one drink in pubs anymore? How come The Temple Bar can close overnight and become a Poundland?